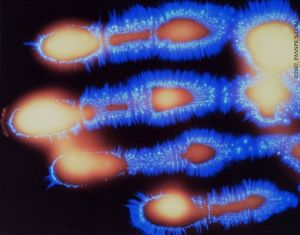 Science advances one funeral at a time

The Theory of Evolution postulates the diversity of the animal kingdom can be traced back in time to one common ancestor, unfortunately, fossil intermediates that would show this progressive change taking place over millions of years are missing. Furthermore, when we talk about a common ancestor we are likely to assume this would mean some kind of primitive protocell – but what is the mechanism behind indivisible pieces of matter forming atoms and atoms forming molecules to build the amazingly intricate cell in the first place. The mechanism is electromagnetism. The power of attraction and repulsion.

Are we really to herald chance as the architect of the cell? Do ypu believe that galaxies, star systems, planets and moons and molecules and atoms form in random configurations from clouds of electrified and magnetized particles and that evolution really is a blind watchmaker without the awareness of knowing what its doing and only able to operate in one direction. To make selections (i.e. move sideways or adapt) or learn from errors and undo mistakes implies intelligence which in turn requires consciousness.

When you take into consideration the size and weight of the biggest dinosaurs that existed on earth hundreds of thousands if not millions of years ago you also have to wonder if they could survive under earth’s current level of gravity, let’s not forget that some of these creatures weighed hundreds of tons, where did they find the energy to breathe, let alone move, feed and hunt. Can we honestly expect bone to be as strong as steel in order to provide structural support for that kind of mobile mass. Perhaps it is more logical to assume that electrical and gravitational conditions on Earth were very different back then, thus making it ideal for super massive creatures to thrive and survive despite their weight.

What kind of event would be needed to force a radical change in Earth’s electrical environment, something like a pole flip, the Sun changing its polarity, an influx of cosmic energy or something else… and what would such an event mean for evolution in real terms, would it speed up the process and literally change the way that DNA code was accessed and read? To find answers to past catastrophes that could have been responsible for changes in Earth’s electrical environment you would need to look at the research of Immanuel Velikovsky and read “Worlds in Collision”. You see Velikovsky hit a raw nerve with established science. After his book “Worlds in collision” hit the number 1 spot in the best-sellers list academic institutions created an unprecedented stink and had it banned. It became known as “The Velikovsky Affair”.

You can always judge the measure of research and it’s greater worth particularly in the world of peer reviewed science by the knee jerk reactions from those that support the Status Quo. Velikovsky was demonized over night.

For answers to what becomes of the long and drawn out process of evolution when seeds and eggs are exposed to modulating electric fields the following research offers some unique and quite amazing insights. It certainly shines light on the possibility that if a celestial event changed Earth’s electrical and gravitational atmosphere dinosaurs would have died off instantly by drowning under their own weight. It might also explain how an explosion of new creatures might have suddenly come to inhabit the Earth

Can the global food problem at last be solved – without using genetic engineering? In his new book the “Primeval Code” (Munich 2007) Swiss journalist Luc Bürgin unveils the secret of a sensational biological discovery at the pharmaceutical giant Ciba (now Novartis), which unfortunately has been ignored by the experts up to the present day. In laboratory experiments the researchers there Dr. Guido Ebner and Heinz Schürch exposed cereal seeds and fish eggs to an “electrostatic field” – in other words, to a high voltage field, in which no current flows.

Unexpectedly primeval organisms grew out of these seeds and eggs: a fern that no botanist was able to identify; primeval corn with up to twelve ears per stalk; wheat that was ready to be harvested in just four to six weeks. And giant trout, extinct in Europe for 130 years, with so-called salmon hooks. It was as if these organisms accessed their own genetic memories on command in the electric field, a phenomenon, which the English biochemist, Rupert Sheldrake, for instance believes is possible.

The Swiss pharmaceutical group patented the process – and then stopped the research in 1992. Why? Because “primeval cereals” generated by an electric field, in contrast to modern strains of seeds, require hardly any fertilisers or pesticides – i.e. crop protection agents, sold as priority products by Ciba at that time. The discovery was soon forgotten, without the global scientific community taking any notice. In collaboration with the researchers involved – or rather their sons, in this book, the author has for the first time now disclosed in detail how the principle of this revolutionary bio-experiment works. Previously unpublished research reports, 64 exclusive photos, English-language patent specifications and interviews document the “Primeval Code” in all its aspects.

Nevertheless many scientists who think along conventional lines may remain sceptical about this inexplicable biological effect. But now for the first time, renowned German expert botanists such as Professor Edgar Wagner of the University of Freiburg and Professor Gunter Rothe from the University of Mainz make positive statements about it in the book. Rothe even had replicated the Ciba experiments in detail at his university in 2001 – and was successful. And also for the first time, even a Nobel laureate – the world-famous Swiss microbiologist Werner Arber – is taking up the cudgels for this controversial discovery. Back then, Arber had given an expert opinion on the Ciba experiments in person in the laboratory. The professor said to the author: “I was impressed!”

Indeed, Guido Ebner and Heinz Schürch appear to have discovered a biological method of effectively creating antecedents from progeny – without using genetic engineering. Or as both researchers put it: “Our experiments do not involve a mutation of the organism in question, which in the case of genetic engineering involves channelling an additional gene into the organism. No entirely new organism is created. In the electrostatic field, only the gene expression is altered – the retrieval of the existing gene. That is something different.”